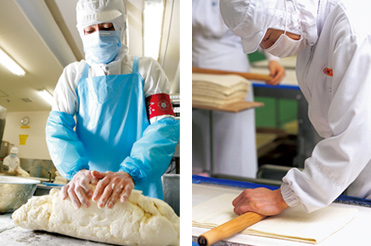 Unagipie Pastries have been beloved by people throughout Japan since their introduction in 1961. Perhaps the biggest reason behind their popularity lies in the hand-baking skill of our Unagipie Artisans, or 'shokunin' as they're called in Japanese. There are roughly 50 Unagipie Artisans carrying on these skills and traditions today.

Every Unagipie Pastry must have the same great taste and texture, no matter when it was made. To keep the same high quality throughout the year and through every working day, Unagipie Artisans all learn to make tiny adjustments to the ratio of ingredients, change the pressure of the rolling pins and control the temperature of the oven based on the environmental temperature and humidity, and even based on the condition of each ingredient as it's introduced.

Mastering these techniques takes more than 10 years, and the long-lasting popularity of Unagipie Pastries is a testament to the care and skill of our dedicated artisans.

To become a master Unagipie Artisan requires not only skill and knowledge, but character. Unagipie Artisans must develop a warrior spirit akin to the sumo wrestler’s principles of heart, technique and physique, honing their passion, self-reliance and compassion even as they perfect their artisanal skills.

Three 'souke' and a single 'shihan' stand at the peak of our Unagipie Master System. 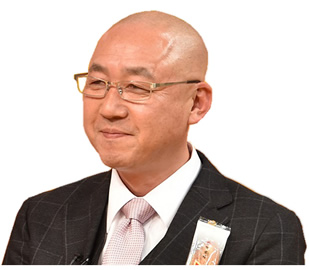 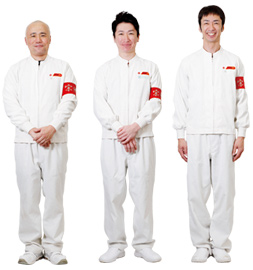 3rd stage (Souke)
Capable of executing and teaching appropriate operations, from preparation to baking. A role model for other Unagipie Artisans.

Final stage (Shihan)
The top-grade Unagipie Artisan. Unparalleled mastery of knowledge and technique. A role model both inside and outside of Shunkado.